My new chapter on the visuality of informal computer culture in Czechoslovakia was just published in the online edition of the Oxford Handbook of Communist Visual Cultures. It offers a new perspective on some topics from the monograph, and also gave me an opportunity to revisit a topic that I had to cut from the book – the enormous popularity of computer-generated biorhythm charts (kondiciogramy in Czech) in 1970s Czechoslovakia. I write: “Based on the pseudoscientific assumption that physical and mental fitness follows periodic cycles starting at one’s birth, biorhythm charts indicated ‘good’ and ‘bad’ days for the upcoming time periods. They married the appeal of horoscopes and numerology with a newfound fascination with computers. […] The chart consisted of symbols or numbers indicating one’s prospects in three areas: physical, emotional, and intellectual. To have a chart printed, one had to know somebody who worked in a computer department, usually in a factory or a research institution.” I argue that biorhythms were some of the earliest populist uses of computers, already in the mainframe and mini era. They were, paradoxically, further popularized by a 1974 Czechoslovak movie that was intended to portray them as superstition, the blockbuster comedy called Jáchyme, hoď ho do stroje (Jáchym, toss him into the machine). I belive that the images of computers and biorhythm charts within this movie had a wide and lasting impact on the public imagination around computing. You can see the main character of the film studying his biorhythm chart here: 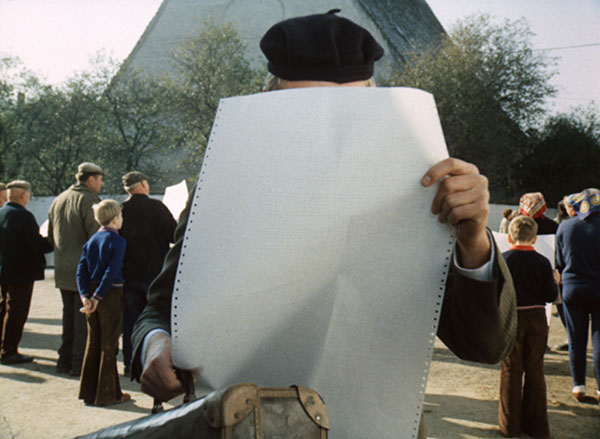 Beside the discussion of biorhythms, I also write about hardware and software bricolage, using some examples that did not make it into the book. You can find the chapter online here.

The whole book has just been published and contains a whole lot of fascinating studies of visual cultures in the Soviet bloc and Communist China.

This article traces the intersections of Western computer technology and everyday life in communist-era Czechoslovakia. It follows computer professionals and hobbyists who participated in bottom-up computing practices, and it discusses the improvised, do-it-yourself aesthetics of the artifacts they created. It focuses on three key examples: the printing of biorhythm charts, which provided the first personal encounters with computing to many ordinary citizens in the 1970s; hardware tinkering, which remedied the scarcity of computer equipment by salvaging and repurposing local resources; and production of local computer games, which built on Western templates but engaged with local themes, sometimes even subverting the authority of the communist party and ironically appropriating its propaganda. It concludes that computer enthusiasts were ahead of party officials in realizing that computers are not just data processing machines but also tools for making and dissemination of culture.